As the state dinosaur of Colorado and one of the most iconic members of Dinosauria, Stegosaurus has earned this spot due to its fascinating history and its large number of fossil remains that allow paleontologists to understand more about Stegosaurus than other dinosaur genera that have a more fragmentary fossil record.

The first remains of Stegosaurus were uncovered during a period in the late 1870s known as, “The Bone Wars,” which intensified the collection efforts between two rival paleontologists—Othniel Charles Marsh and Edward Drinker Cope. Marsh initially discovered Stegosaurus in 1877 near Morrison, Colorado. Marsh first thought those remains belonged to a turtle-like animal, but soon revised this finding as more Stegosaurus fossils were unearthed.

The largest Stegosaurus could stand four meters (12 feet) high at the tallest back plate and could reach lengths of up to nine meters (~30 feet). But the size alone is not what sets Stegosaurus apart from the other animals it shared its ecosystem with; rather the plates that line the spine of Stegosaurus make this dinosaur recognizable to everyone. Yet the plates remain an enigma; paleontologists have put forth many theories regarding how the plates are positioned. When Othniel Marsh first found the remains, he thought the plates lay flat against the body like the armor of a Pangolin (looks like a scaly anteater).

Through the years, paleontologists have refined the theory regarding the exact configuration of these plates, which went from two lines of identical plates on the back, to one row of plates that alternate. Scientists now place the arrangement of the back plates in two alternating rows and oriented vertically.

What these plates were used for is still up for debate and has remained so since the animal’s discovery. Robert Bakker, a world-renowned paleontologist and curator of the Houston Museum of Nature and Science, speculates the plates of Stegosaurus were the inside, or core, of a bigger plate made of keratinous material. Bakker also suggests these plates were semi-movable and the animal used them as a defense, splaying them out to the sides to deter predators from coming too close. Other scientists have claimed the back plates were used to attract a mate or to control body temperature.

Even if the plates of Stegosaurus were not used for defense, Stegosaurus carried with it four spike-like osteoderms (bone embedded in the skin) on the end of its tail. These spikes (informally called thagomizers) bent out to the sides and backward and were likely an incredible defense against many large predators of the Morrison Formation.

In 2014, Robert Bakker found a large open hole in the lower-front portion of the pelvis of a mounted Allosaurus skeleton at the Glenrock Paleontological Museum. The hole fits the tail spike of a Stegosaurus. This is evidence of just how formidable the tail of a Stegosaurus was as a defensive weapon when it struck the crotch of an Allosaurus. Evidence suggests bacteria, broken bone, and other debris remained in the wound, causing an infection that eventually killed the animal. According to Robert Bakker, “A massive infection ate away a baseball-sized sector of the bone, probably this infection spread upwards into the soft tissue attached here, the thigh muscles and adjacent intestines and reproductive organs.”

The brain of Stegosaurus, although not quite walnut-sized, was unusually small compared to its body mass. So far, Stegosaurs claims the smallest brain size to body mass of any other dinosaur. This small brain presented a problem—how could it survive without more intelligence? It seems the large plates on its back and the spikes of its thagomizer were keys to its survival against predators. Also, Stegosaurs behavior played a role. Paleontologist Matthew Mossbrucker discovered in 2007, footprints of adult, juvenile, and hatchling specimens in the Morrison Formation that suggest Stegosaurs stayed together in small groups, most likely for protection against predators.

Stegosaurus is the rhinoceros of the Late Jurassic as it was both an herbivore and highly dangerous to anything it perceived as a threat. Stegosaurus died out near the end of the Jurassic, leaving only fossils and footprints as a reminder of its existence. However, paleontologists can, using fossils and a little bit of educated guesswork, begin to understand how this animal behaved, how it lived, and how it died. 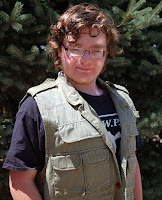 Author’s Bio: Destin Bogart is 16 years old and ever since he can remember he has had a passion for paleontology. He is an Earth Science Scholar with the Colorado Springs Mineralogical Society and is a junior IB World Student at Pueblo West High School. Destin is planning a career in vertebrate paleobiology.

Posted by Steven Veatch at 3:55 PM