I saw the stone on a long furrow, after the farmer’s spring plow,

like a glob of pudding packed with raisins, nuts, and bits of cranberry.

When I picked it up, I held eons of time.

As I wondered how the stone looked long ago, it broke its silence

and whispered its ancient origin, from an era when rushing streams

tumbled rock fragments, in a wild dance over time’s expanse.

As the days passed by, slowing water scattered pebbles on sand

and mixed them. Over time the material hardened into a rock

with a chaotic fabric of colorful stones cemented by sugary grains of white quartz.

More time, then more time, and with heat and pressure

And then more change, and the days grew gray, cloudy, and cold,

this stone from Ontario’s bedrock

and carried it away.

The climate shifted, the blue ice melted, and the stone released

on a quiet Michigan landscape for me to find 12 centuries later.

I put the stone back down, where agents of weathering

and time will change it once more, breaking

it down to its original ingredients.

The puddingstone makes me pause and ponder,

and I am here to say the only true constant

is endless change. Nothing stays the same,

First published in the Betsie Current.
Posted by Steven Veatch at 9:05 AM No comments:

By Steven Wade Veatch
Desert varnish
drips down rocks
marking time.
Spirals, stars,
animal shapes,
sacred symbols,
pecked on rocks
from centuries past
reveal a silent song
and the shaman’s path.
A breeze whispers
through sagebrush
while a sunbaked lizard
rests on a rock.
A hawk, flying high,
disappears into the canyon
where echoes of ancient
chants draw me
to where I
belong. 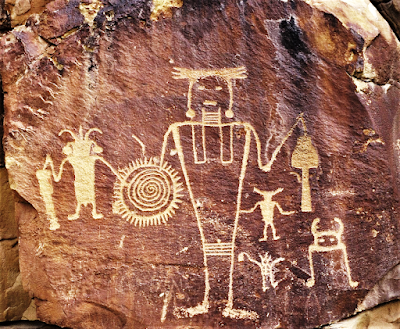 A Headframe to the Sky

Faint traces of a wagon road in backcountry

curve to a gold mine hidden in the trees.

The mine’s headframe reaches to the sky—

a crown of confidence on unbreakable dreams.

Blue pines rock and wild grasses tip in the wind.

Gray clouds nod in the distance.

Miners once made their way with burning candles

toward rhythmic clangs of hammers and drills,

while stepping aside for donkey-drawn ore cars

pounded steel that drilled the rock

then packed dynamite in the holes they made.

A rattail of fuse detonated a round with a thundering blast.

Timbers in tight embrace held the Earth in place

as spectral Tommyknockers scurried and hid

in opaque blackness beyond the candle flame

Now the gold mine is silent, the sheave wheel stopped.

The underground workings—still as held breath.

The mine a monument to how the West was won.

A progress secured by the lure of gold.

where deer dip down to browse nearby.

The mine still makes its claim on the land

Posted by Steven Veatch at 9:09 AM

On August 10, 1908, a visitor to the Pikes Peak region traveled up the dusty, winding road through South Cheyenne Cañon. This road, long hailed as "The Grandest Mile of Scenery" in Colorado, ends at Seven Falls, a tourist attraction since the early 1880s. Fascinated with the sights along the way, he bought a postcard at the local curio shop to commemorate his tour.

Moved by the striking geology along the road, he began to consider the geologic processes at work. He observed how South Cheyenne Creek relentlessly carved down through the faulted Pikes Peak Granite to create the cañon. He wrote messages on both sides of the postcard to remember how these geologic wonders moved him on that summer’s day. On the front of the postcard, he wrote:

On either side are perpendicular walls, nearly a thousand feet high and at one place, but forty feet apart, barely giving room for the creek and roadway between them. Indeed, the whole space was originally occupied by the stream, which had to be crowded from its bed. Saw this Aug. 9, 1908.

And then, on the back of the postcard, he typed:

Before us are two tremendous cliffs “The Pillars of Hercules.” They seem to stand squarely across the cañon, completely filling it and demanding a halt. The way seems barred, and the stranger is at a loss to know which way to go, but the brook has found a way and so must we. Here is a most wonderful demonstration of the action of water. For hundreds of feet the cañon at this point has been worn through the solid granite.

The anonymous visitor did not mail the postcard but kept it with his important papers and keepsakes. That this postcard has lasted all these decades is as remarkable as the magnificent mountain scenery it portrays. The cañon continues to this day to impress visitors.

Posted by Steven Veatch at 9:33 AM No comments:

A Photo at the Museum

I see you in the fading photo looking back at me.

Evidence that shows you lived.

I wonder who you were, touching the world,

learning in a one-room school, following

a deer trail, and then working in a gold mine.

Nothing else mattered. Just years passing by.

You stepped into an unknowable darkness,

then you were gone, and your possessions disappeared—

As your world collides with mine,

What will I leave behind?

Will they go to a museum?

Will they fill a cigar box?

I am lucky, I filled

Posted by Steven Veatch at 1:03 PM No comments:

A troubled man, with a festering and poisoned mind, emerged from the shadows on a Saturday night, just five days before Thanksgiving, 1903. He went down the shaft of the Vindicator mine, a substantial gold producer in the town of Independence, one of more than a dozen camps in the Cripple Creek mining district of Colorado. While down in the mine, this man planted a device that would later explode, killing two men. He had hoped to kill more. This was not the last act of violence committed by the fanatic bomber known as Harry Orchard. He later planned another attack, one that would be more destructive and more lethal for the town of Independence. And there would be other incidents of mayhem: saloon fights, gunfights, railroad accidents, and injuries from mining. Independence was anything but a quiet town.

First known as Hull’s Camp, the town was renamed by promoters after the storied Independence mine, which is 2.5 miles south of the townsite. According to The Morning Journal, Mr. W. S. Montgomery, one owner of the Hull City mine, said, “Yes, there will be a town at Hull’s camp and it will be known as Independence. The site of the new town is an admirable one, with plenty of water and well sheltered by the surrounding hills. It is the center of the most productive section of camp. The streets are now being laid off and already several large business firms have signified their intention of locating in the new town” (The Morning Journal, Oct 28, 1894). A group of town organizers formally platted Independence on November 11, 1894 (MacKell, 2016).

Over granite and sandstone

Revealing the history of the Earth

While beside the waterfall

My days flow by as fast

Posted by Steven Veatch at 7:22 PM